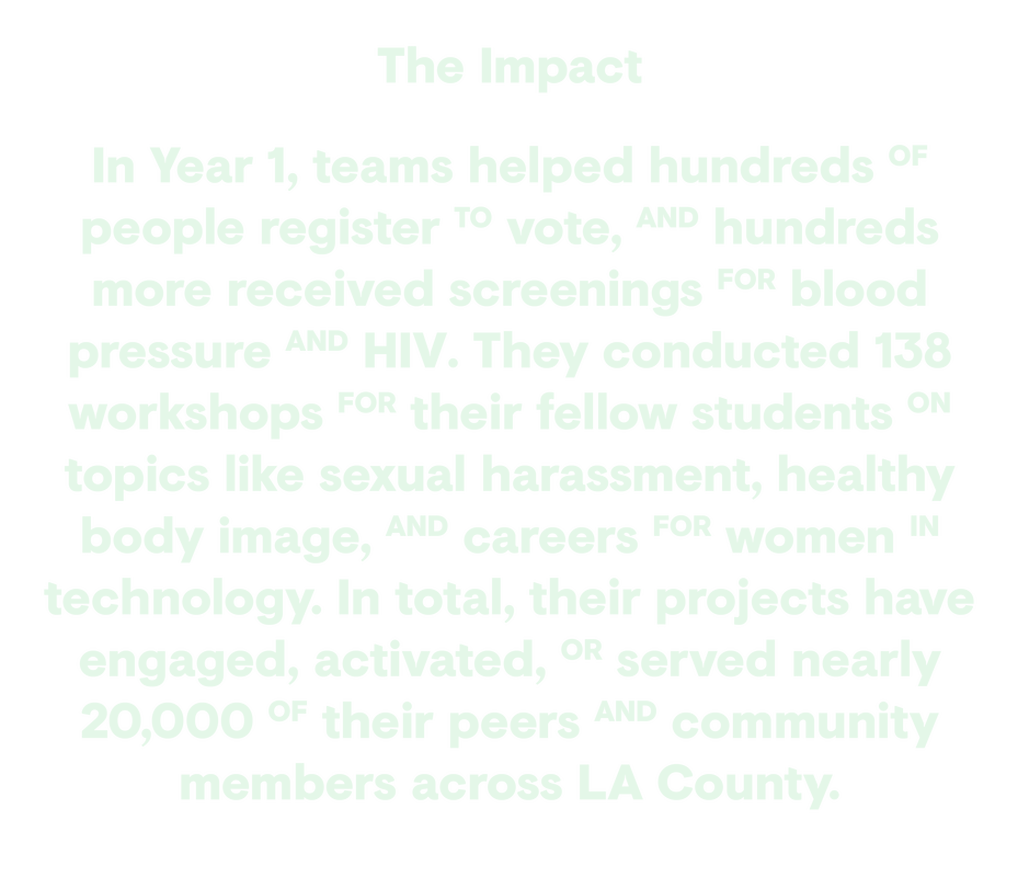 High School Category
1st Place: Ramon Cortines School of Visual and Performing Arts
A school-wide survey at Ramon Cortines revealed that stress was the students' biggest concern. So the Girls Build LA team decided to focus on providing stress management tools to their peers. Over the course of the program, they made 20 classroom presentations to a total of 693 students addressing mindful eating, mindful communication, mindful movement and breathing, and mindfulness using the arts. Their project culminated with a school-wide mindfulness fair, attended by roughly 400 people. Each student on the team received a $1,500 scholarship.

2nd Place: La Puente High School
This team, self-named "Warrior Girls Build LA," addressed Civic Engagement & Leadership. La Puente’s population is roughly 40 thousand people, but only 15 thousand are registered voters. The team decided to focus on voter registration. In support of the team's efforts, the La Puente City Council proclaimed March 23, 2016 to be La Puente's Voter Registration Day. The team also raised visibility when they appeared on Univision’s “A Primera Hora” to speak about the importance of voting and advertise their voter registration event. The event was a big success, and the team registered over 250 voters. Each student on the team received a $1,000 scholarship.

3rd Place: STEAM Legacy High School
Thirty percent of the population of South Gate, where STEAM Legacy High School is located, is obese. Focusing on empowering students and local citizens to make healthy choices, this team, called DE R.I.D.E, created and shared educational materials, organized a 5k race, and even built a bicycle that, when ridden, can power household electronics like a cell phone or television. The bicycle functions as a charge station, stationary exercise machine, and community builder. The bicycle became a great way to engage students and community members. The team presented about it to the school’s PE classes, parents, city officials, and international representatives. Each student on the team received a $750 scholarship.
Middle School Category
1st Place: John Muir Middle School
The winning middle school team, #GirlsCan2, took on the issue of female representation in STEM careers. They started conversations with younger students about gender and racial inequalities in STEM; increased the representation of female role models in STEM on their school campus; and launched a campaign to change student perceptions of gender within the STEM field by creating engaging, hands-on teaching tools that can be delivered to classrooms across Los Angeles: Women of Color in STEM Starter Kits. Each student on the team received a $1,500 scholarship.

2nd Place: Hale Charter Academy
Hale Charter Academy's team, called "Help Me Help Myself," focused on Health & Wellness, and specifically, on finding ways to handle life's challenges - like the loss of a loved one, fitting in socially, and body image. The group met weekly and hosted over 20 events, which included visits from guest speakers, as well as a He Name Me Malala screening night with a clothing drive for girls in need in Pakistan. Each student on the team received a $1,000 scholarship.

3rd Plce: John Adams Middle School
John Adams' student body is 98% Hispanic. According to kidsdata.org, 14% of Hispanic students in California dropped out of high school in 2014. In an effort to change those statistics for their school and community, the team "GBLA College Squad" engaged students and parents in conversations about college. They covered LAUSD high school graduation requirements, the A-G requirements, the advantages of attending a community college, and the difference between CSUs and UCs. The team signed a pledge to go to college and even organized a college tour. Each student on the team received a $750 scholarship.